Tuan is another of my favourite characters in The Anatomy of Escape. The following is an excerpt from the book introducing the reader Tuan .

(excerpt from The Anatomy of Escape) 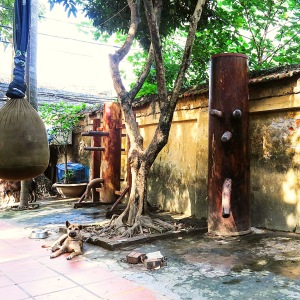 The address that Igor gave me took me to a Kung Fu dojo in a small village on the outskirts of Hanoi. I parked my motorbike just inside the gate. The venue was overgrown with trees with exposed roots and all manner of punching bags suspended from them. Vines were breaking into the premises from all directions. There were contraptions that would have been unremarkable in a torture chamber. Huge and ancient-looking vats containing carp and lily pads were dotted about, and carved stone and wooden symbols and insignias adorned the perimeter walls. I’d walked right into a scene from a Jean-Claude Van Damme film.

Igor reported that Master could fix my ailment; it would take thirty consecutive days of electro-acupuncture, traction and Chinese hot poultice treatments. I was also given a liquid concoction of herbs and alcohol to both drink before meals and massage into my shoulders. I was sceptical. But finding treatments and training under the guidance of one of Southeast Asia’s most well-known eastern healers was a windfall not to be dismissed. Master was a feared and respected Kung Fu practitioner. He could push a four-wheel drive thirty metres from a stationary position using only a sharpened bamboo pole lodged in his windpipe. I am not sure under what circumstances that would be useful, but it was very impressive. 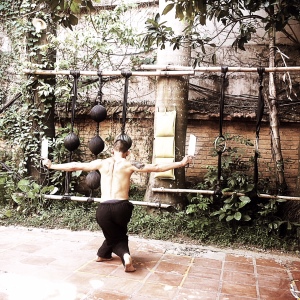 Every day for the next thirty days was fundamentally the same, except my familiarity with Master and his students grew. The comic aspect of our utter inability to understand each other’s language grew as well. Master assigned me a mentor named Tuan. He seemed to be the second in command at the school and was referred to as Tuan the Torturer or the Beast by the other students. His physical condition relegated Jean Claude Van-Damme towards the Michelin Man end of the body fat spectrum. He was a tangle of high-speed sinew. He would be responsible for my treatments and Qi Gong education and would eventually be castigated by the Master for trying to coax me away from my main work there and into his own breakaway Kung Fu sect within the school.

The series of treatments would start at a different time each morning. Everybody except me knew the formula for the start time, so I would arrive early every day, sit by the central carp pond, and drink green tea. The pond was the social gathering spot where all would meet before and between treatments and classes, drink tea and smoke cigarettes relentlessly. Smoking cigarettes and poor health do not seem to have been linked yet in Vietnam.

Tuan would arrive, drink tea, smoke, and poke fun at my physique. I never knew what they were saying, but I was happy to contribute to the comic atmosphere even if it were about my comparatively large, useless body. Even the children would challenge me to contests of skill at Tuan’s insistence. Tuan would make particular fun of how weak and soft my hands were; if only they had seen them when I was an accountant, the place would have gone into meltdown.

I recall one brief conversation at the carp pool in which a young child was quizzing me about my hands.

“Why are your hands so soft?”

“Well, for twenty years I only typed.”

Eventually and simultaneously, as if internally wired to some extrasensory school bell I had yet to install, everyone would rise and begin their duties. I would follow Tuan to the torture rack where he would chat and laugh without pause as he stuck sixty needles into my back and had one of his helpers apply the electrodes. There was always one helper whom I feared as he was clumsy on the voltage and often turned the dial too fast and too far, causing me to convulse and Tuan to lead the chorus of laughter.

After that it was back to the carp pool, tea, and cigarettes, and then back to the rack for the hot poultice. The students brewed the poultice from a variety of plants and herbs, beat it to a pulp with a mortar and pestle the size of the smallest student there, and then boil it. They then would apply a great lump of scalding vegetable matter to my back and wrap me in cling wrap. I don’t know whether after five minutes it actually felt good or it just comparatively felt good because it was no longer burning me. 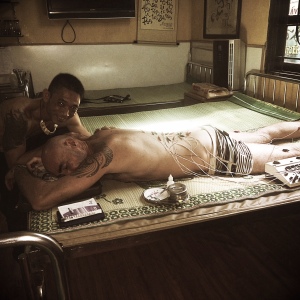 After an hour, it would be more tea and cigarettes, and then the traction treatment. The traction bench was an old gym bench press that had been modified with a series of bicycle inner tubes. Students would secure my ankles to one end with inner tubes and ropes and arrange a complicated harness of tubing under my armpits and behind my neck. Then with their feet braced against the head end of the bench press Tuan and a student would yank the tubing harness as far as it would go and then fix it to a winch welded to the bench press. A student would wind the winch every ten minutes or so, lengthening my spine. I would force myself to think of other things because thinking about what was happening to my skeleton brought on a degree of panic, which worried me more than the mild physical pain. It seemed to also stretch everything inside me. My lungs felt tight and my breathing became shallow. It wasn’t much fun.

After an hour I would be unable to sit up. With my back stretched and weak, I would be carried to the poultice rack without tea or cigarettes, and I would lie through another hour of poultice treatment. While there was some pain in the traction, it dissipated when the subsequent poultice heated my spine and the vertebrate slowly contracted again. At the conclusion of each days’ treatments, Tuan would point to one of the younger students and yell something, and that student would take me through my Qi Gong practice.

Book Launch is on the 9th of July – details available then!

AVAILABLE NOW on Amazon in Paperback and eBook