How NOT to Write a Book

Now that I’ve finished writing my latest book The Anatomy of Escape, and am in the throes of planning the launch, set for the 9th of July, I thought I’d reflect on my inefficient process of writing. I’ve learnt a lot not just about the writing itself, but about how to set myself up for productivity, indeed any progress at all. I learnt mostly through trial an error. Actually, it was mostly error. I’m here now in Colombia looking for an environment to write my next book and an environment where I will overcome the biggest issues I had writing the last one while living in a bus in Indonesia. Here are the main impediments to progress that I discovered. 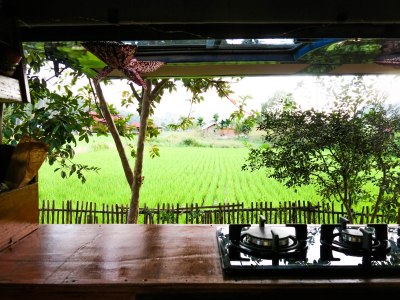 Finding a dedicated place to blurt out words onto a page or a screen when you only have five cubic metres in which to do all of your living is not easy. Over time I found I gravitated to my kitchen bench. I’d park up the bus with an average view, nothing too amazing for fear of distraction and then get busy. The problem was that my bookshelf was a few centimetres away from my laptop, my stove a few inches and my bed about 2 feet. I was trying to write in the same place, give or take, that I cooked, cleaned, read, slept…everything! The writing nook did not say ‘write’ to me. When I find my next place to stop, I’ll make sure it has a dedicated spot to write. 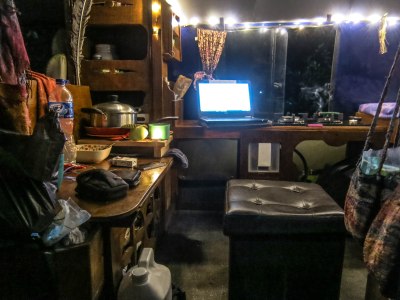 Ordinarily, I find the best time of day for me to find thoughts and words is in the morning after a bit of exercise. The problem with a nomadic lifestyle is that no two days are even remotely the same, so one becomes a bit of a time scavenger. The daily tasks of living such as finding food, finding a camp, interacting with villagers, hiding from villagers and keeping the bus on the road, in general, are the top priorities. Writing tended to just seep into some of the gaps in between. I learned that for better productivity, I would need to set a specific time, ideally the same time every day, and for that time, make writing the top priority. Stuffing in an hour of writing in the middle of the night amongst dirty pots and pans having just relocated to avoid a home invasion is not conducive to productivity. 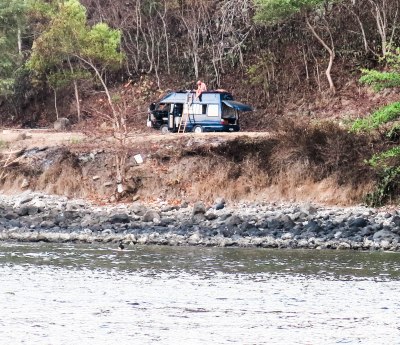 In addition to a dedicated place and a time to get stuff done, one needs a comfortable work environment. Stating the obvious, discomfort would often get in the way of progress. I will be looking for a nook to populate with a good desk and chair, and ideally, a window that lets in a lot of light but not much distraction. Sitting on the roof of my broken-down bus on a dusty road, lost somewhere outside of Candidasa, Bali might seem romantic, or not, but it is certainly not a comfortable place to smash out a thousand words. 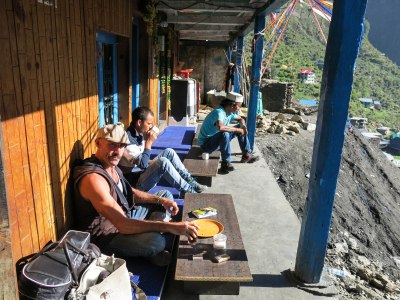 Distractions prevent you from getting into the writing zone and staying in the zone. If the distraction doubles as inspiration, it is not so bad, but there’s nothing inspirational about being almost force-fed chillum after chillum of high-grade Malana Cream hashish in the mountains of Himachal Pradesh, India. You might start out with good intention and it might seem at first to provide a fountain of ideas, but to unaccomplished smokers such as myself, it is not a good idea. Even alcohol is detrimental to the quality of work, after a few glasses. When I edit work that I have written under the influence of intoxicants, I often can’t make head or tail of what I was banging on about. My next writing zone will be intoxicant free, and ideally quite sparse. 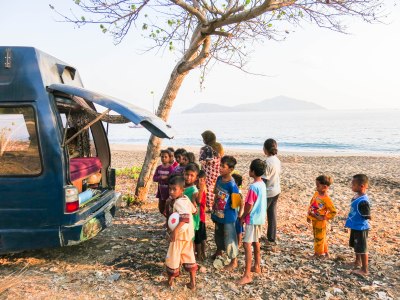 One very specific type of distraction I found to be the worst kind – people. One would think that living in a bus would enable some extreme isolation. The problem I had, was that at least for the first year or so, I was not alone in the bus. For the later years, when I was the sole inhabitant, no matter how far away from civilisation I thought I was, people would always find me. Like moths to a flame, villagers would come at me from seemingly nowhere and want to engage. Of course, I could not, nor would not ignore this and so writing for the day would come to a close. I’ve determined that writing in public is not beneficial to concentration.

For the next three months, the time I have left in Colombia, I’ll continue moving about as I look for a potential zone that I can call home for a while. I won’t even attempt to write seriously until then. Besides, with the 9th of July only 5 weeks away, most of the time I spend on this laptop will be on planning and promotion for The Anatomy of Escape and planning my next move in this most beautiful country, Colombia.

The Anatomy of Escape is now available on Amazon in eBook and Paperback.

5 thoughts on “How NOT to Write a Book”