It feels like it’s been a while since I’ve paid much attention to The Life Adrift. You could reasonably suspect that I had lost interest, but this is untrue. I’ve been distracted by other projects. Yep, I know that’s a bit slack and I have a plan to rectify it but let me update you on what’s been going on. Some readers may already know some of this so I won’t drag this out in my usual wordy manner.

Over the last few months, I sold my house, my office and my car in Indonesia. All of them were, in fact, a converted food van named Rosie, in which I lived, worked and drove. After a quick and rambunctious visit to Australia to see my family and friends, I took the proceeds from the Rosie sale and turned that into a one-way ticket to Colombia and a bought a motorbike with the change. So, the life adrift continues, albeit on half the wheels it previously got around on. 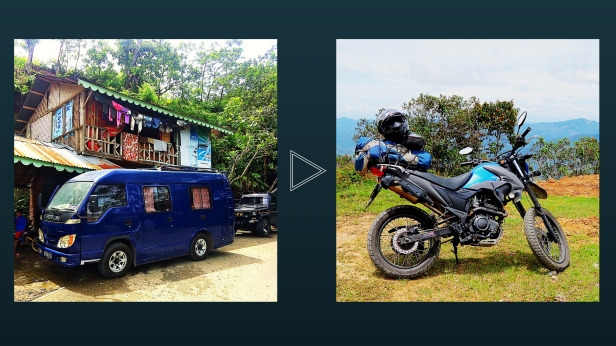 Since I arrived here, some two months ago, I have been carving out a route from Medellin to Cali, mostly supporting the journey by house and pet sitting and doing the odd bit of farm stay work. For all of these accommodation solutions, I’ve either taken care of someone’s property or pets in their absence or throw in a bit of much enjoyed hard labour for a bunk and some gruel. I plan to continue doing this for the time being. I’ve met some awesome people and animals (excluding one ferocious albino peacock) and learnt a lot in the fields of permaculture, bamboo construction and Chileno boxed wine appreciation. There are some stories to come out of the trip so far. Sadly, I can only be in Colombia for six months due to my visa conditions. That is unless I get a different work, study or marriage visa. All options are on the table.

Over those last few months, I’ve also been finalising my second book, The Anatomy of Escape: An Unconventional Adventure. I wrote it primarily in the time I was living in the bus, but the editing, formatting and publishing process has taken quite a few months since then. I’m pretty excited about it. Don’t go looking for it yet! The launch date is the 9th of July, 2018. So, I’ve been lining up some reviews and a bit of promotional stuff. It’s all coming together. I’ll keep you well informed as the launch comes closer. The cover art process was a lot of creative fun…thanks, those friends who contributed.

The future is uncertain, but here’s a guess.

So, where to from here? What’s coming up?

Well, there’s the travel plans. It’s been twenty years since I was last in Colombia, so it’s exciting to be here again and even better to have a motorbike so I can go wherever I want, whenever I want. I plan to go to some quite far out places.

There’s The Anatomy of Escape. For the month of June, I have a bit of work to prepare it for the launch on the 9th of July. I won’t be able to stray too far from an electricity source, as all that work happens on the laptop on which I now write. But once that’s done, look out!

And then there is this blog. I’m planning to be a bit more consistent, more reliable to my readers, to make up for months of neglect (we’ll see how long that lasts…). Here’s the type of content you can expect from here on in. Everything will still have the same slant, The Life Adrift angle – living simple, nomadic and considerate of nature. That doesn’t change. What DOES change, is from now on I’ll write shorter pieces as feedback tells me that most people don’t have the time to read 2500-word essays on their smartphones. The topics will also change a bit. There’ll be three main areas from here on in.

So, watch the space here. Hopefully, I can deliver at least a decent fraction of what I claim to be able to.

Until next time, drift on!